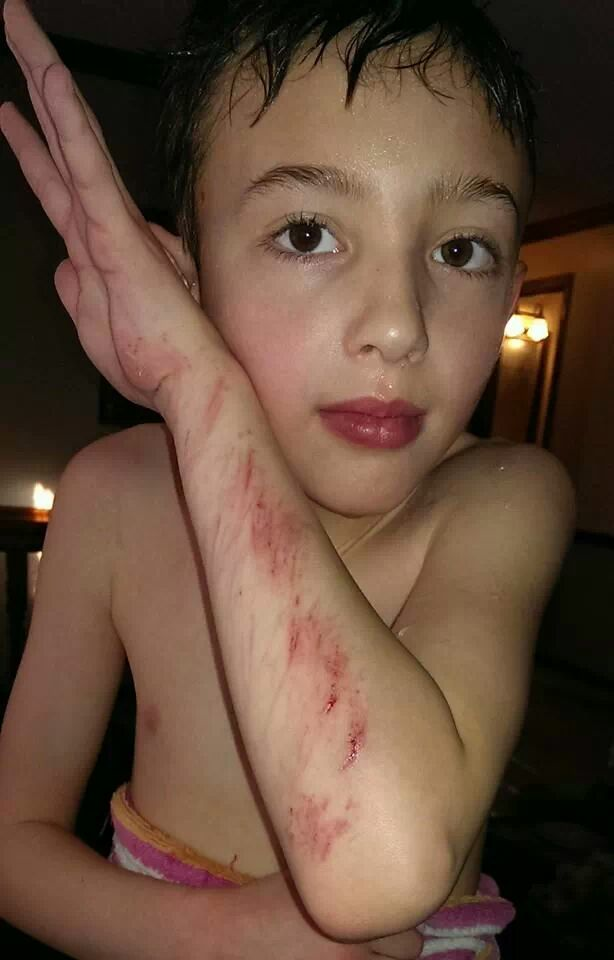 While going back to work has had it’s challenges and struggles, there are some perks.  I get to see my kiddos every day several times a day.  I often eat lunch with Toad or with Kyra.  Kaeson and I plan lunch dates, but since his lunch is earlier than mine, he usually forgets.

I love seeing the kids walking down the hall.  I love getting random hugs from Kaeson.  Toad refuses, he gets embarrassed hugging mom in the hall or holding my hand.  He has already hit that point in life.  Funny though that at home, he is the most clingy little guy ever.  He is always snuggling, holding on to me or wanting to be right with me.  Kaeson however, has no reservations with giving me a huge hug and kiss in the middle of walking to the library or recess.

This little perk came in handy a few months ago.  I had dropped my class off for lunch and was walking down the hall when I saw an aide come in the school doors with a screaming and wailing child.  He was dripping blood and was wet from head to toe with ripped clothing.  I thought, “Oh, poor kid,”  took two more steps and realized, “Oh, that MY kid!!!!!”

I quickly caught up with the aide and followed her into the sickroom.  While she sat putting on gloves, I started cleaning Kaeson’s arm.  The aide was a little flustered and handed me a pair of gloves.  I didn’t stop.  He was screaming and wailing as he does when he is distressed.  I was trying to calm him down.  The aide turned to me and said, “Could you call his mom and have her come and get him.”  I said, “I am.”  A few seconds later, the aide, slightly confused that I was so involved in this student, said, “Did you find out who his mom is?  Could you call her?”  I chuckled and said, “It’s me.  I am his mother…. He is my son.”  A sign of huge relief came over her face and she laughed.

Kaeson, still wailing, but now cleaned off as much as we could, walked back to my classroom with me.  My aide, ran home and got him some new clothes and I got him a treat from my treasure box.  I was able to spend lunch calming him down and getting him to relax.  He was able to smile and laugh and go back to class, a little worse for the wear, but ok.

I thought how lucky I was to be there, at the school, in the hall when this happened.  I am so glad that I was there to help him out and to calm him down.  If I had been at home when this happened, it would have taken a while for me to get there, he would have been absolutely out of control.  What a blessing to be there right in the moment that it was needed.