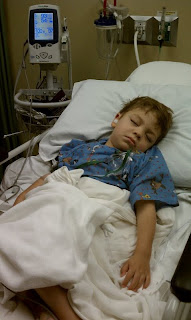 Last week Toady had surgery.  When he was a few months old, we had ear tubes put in.  He had had 9 ear infections by the time he turned 6 months old.  The tubes helped to solve the problem, until now.

In October, when I was getting my surgery done, my ENT took a look in Toad’s ears and noticed that one of his eardrums had a gigantic hole in it.  It was most likely left by the tube and just never healed properly.  This was concerning to me.  The doctor told me to wait six months and we would see if it improved.  Needless to say, it never did.  We made the decision to get it fixed.

The surgery went so smoothly.  He didn’t come out of anesthetic very well, but neither do I.  He was very headstrong and wanted his IV out pronto.  The veins in his hands were too small (I could see that they had tried to put on in his hands) so they put it in his foot instead.  As soon as he came out of anesthetic, he was screaming and trying to rip the IV out.  The doctor, and everyone else for that matter, tried to reason with him to eat a Popsicle before they took the IV out.  They wanted to make sure that he was hydrated and doing well before making that move.

He is now doing fantastically well and announcing to everyone that he has an eardrum.

As a cute side note, I was substituting Toady’s primary class on Sunday.  The chorister enthusiastically told Toad to sing loudly and that set Bear off.  Bear was very quick to tell the chorister to stop yelling at his brother.  He said that he had just had surgery and could easily get an ear infection and that she needed to be nice to him because he was just a little guy.

The chorister (who knows Bear well and knows what he is dealing with) was very sweet and said, “Thanks Bear for being so great and sticking up for your brother.”

It is moments like these when I think that I am doing an ok job as a mom.  The kids are really learning something from what I am trying to teach them.  That, and they love each other.  That means more to me than anything else in this world.

What cute kids 🙂 I'm glad his surgery went well. I hope that's it for the little guy.