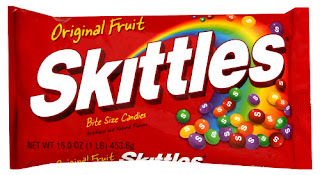 The other day while at the store reading labels for Nena, I saw that Skittles were free of all of her allergens.  I immediately bought the biggest bag that I could find.  That is SO out of character for me since I rarely buy candy.  However, I am trying to stock up on treats that she can eat so that she won’t get discouraged early with her new diet.

This morning, while cleaning up breakfast, Toad caught a glimpse of that giant package of Skittles in Nena’s special cupboard and went CRAZY!  He wanted those Skittles more than he wanted air to breathe (yes, he is truly my son.)  I saw my golden opportunity for potty training and told him that he could have some if he went potty.  Oh, he was all over that idea!

In retrospect, this is where I screwed up 🙂  I took the big bag of skittles and poured a hundred or so into a little jar with his name on it.  I thought in my momentary brilliance that I could keep a small jar of the candy up by the potty to eliminate the running back and forth and stairs (heaven forbid I actually do a bit of exercise.)  He was lit up like the Rockefeller Christmas Tree.

He ran upstairs and as quick as a wink went pee pee in the potty (and the surrounding area as well.)  He looked up at me with those giant green brown eyes and smiled the smile of Charlie Bucket and held out his hand for the candy.  I reached over and out of that tantalizing jar of Skittles, I picked three and placed them in his tiny chubby palm. 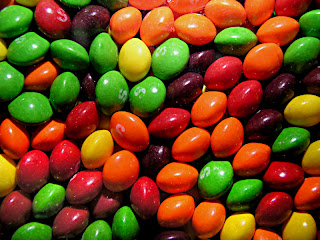 He looked at his palm and looked at me and back again before bursting into tears.  It was a full on choking, gurgling, just split my head open cry.  I immediately did a quick look over to see if he had hurt himself while standing doing nothing.  But, no.  Nothing.  He finally calmed down just enough to choke out the words, “The Jar!”

Oh, poor kid though that he was going to get the entire jar of 100+ Skittles for doing the deed!  His tiny toad heart was broken like the man left at the alter.  My heart broke a little too.  What cruel, heartless mother taunts, teases and does the bait and switch with a potty training, overly emotional two (almost three) year anyway????

I sat there momentarily considering (I know, it was early in the morning and I had a headache) giving him the rest of the jar.  However, my guardian angels stepped in to give me a moment of sanity and clarity.  I handed him one more Skittle and told him that he could have more when he went again.

Although still a bit perturbed at his obvious traitor as a mother, he conceded and ran back to the potty and went again.  This time he came back and was thrilled to get the few Skittles that he received.  However, he looked up at me with those cunning eyes and said, “When I go poops, I want 8 Skittles,” and walked away.  Well, ok. We shall see who wins in the end on this one!  I am just thrilled that he is finally motivated to go potty.  Yes, this is coming from the boy that wants a doughnut and a hot dog for his birthday….. as gifts.

He is so dang cute!

Elizabeth B. Jensen Login to Reply

I love this post. The way you put your words together is just brilliant. And your little Toad is so cute.
Mary Ann has no interest in using the potty. I'm hoping one day this will change. I may have to use your skittles technique.

I love bribery and I used stickers for my daughter at that age! Ha ha! Whatever works! Toad sounds like he is a pretty smart little boy! And he's such a cutie!!