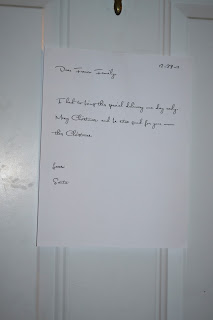 This year we arrived home from our family Christmas party to a little surprise.  There was a little note on our door saying that Santa had so many deliveries to make that he had to come one day early to deliver some special gifts to the kiddos.

Although I had prepared a small, yet cute Christmas, it was so nice to know that someone was thinking of me and my little family during this season.  I will admit, this was the toughest year for me yet.  I ordinarily would be more reserved about posting this incident, but it served to be a small miracle in the eyes of Bear.

We had spent the evening of the 23rd at my parent’s house at a family Christmas party.  Bear was insistent that Santa was coming that night.  He kept telling my mother that Santa was on his way.  My mother however, kept trying to convince him (to the point of frustration) that Santa was not coming on that night, but the next night.  they just didn’t see eye to eye.  I didn’t know how I was going to explain that to him the next day that Santa didn’t come. 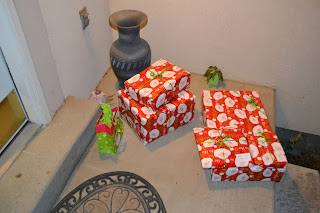 That night, on our return home from my parents house, a small miracle was born in that Santa did arrive, just as Bear had predicted.  Now, I know that having faith in Santa is not something that I should encourage for long, but sometimes being a single mom of a particularly quirkly little Bear has it’s challenges.  It is nice when someone steps in to fill a miracle. 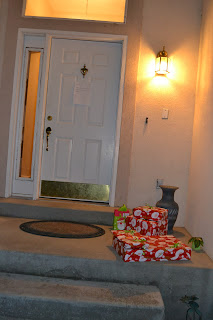 Thank you.  Whoever you are.  You will never have any idea the impact that you made on our little family this year!

That is so cool. There is NOTHING wrong with encouraging belief in Santa. It is part of growing up and figuring out the logic behind him. Don't be hard on yourself. Keep those little ones believing in miracles because those do come true!