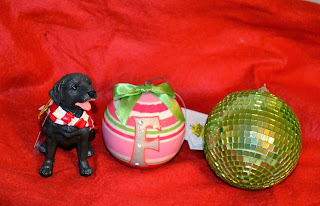 Every year I buy a new ornament for each one of the kiddos. It is one of our favorite traditions. Every year is a surprise as to what each of the kiddos chooses. I keep telling myself that I will shop earlier in the season to get a bigger selection. However, that is still a pipe dream. I got out about a week before Christmas and the selection was very very very slim. In fact, we had to go to two different stores in order to accommodate all three kids.

This year threw me for a bit of a loop. I thought that I knew my kids and thought that I could pretty much pick what they would choose, but boy was I wrong. By looking at the ornaments, you would never guess the true personalities of my kiddos. However, I loved that they chose so far outside of the usual box.

I am going to give you a second to guess which child chose which ornament….

Well, Here are the answers…

Nena picked the dog. That actually isn’t too far off for her. She is such an animal lover. She would rather have a stuffed animal than any other toy most days.

The pink ball with the F on it is Toad’s. Toady picked this one simply because the F flashes. I think that it is adorable. Someday when he shows it to his kids, he is going to get a huge kick out of it.

Bear picked the sparkly green ball. He was the pickiest out of all the kiddos. We had to go to the additional store to find this one. He was thrilled when he originally found it… then dropped it and it broke into about a million pieces. Luckily, the store had another one on hand for us.

This is one tradition that I thoroughly enjoy! I look forward to what they may pick next year.

I think that is such a great idea. It will be great for them to have ornaments when they move out…but don't worry, they are never going to move out.