Oh goodness, I am so far behind.  We actually did have a Christmas.  I promise.  The kiddos spent the evening at their dad’s house and then came home to open up their Christmas Eve presents.  As always, we got pajamas.  They love this tradition as much as I do handing it down to them. 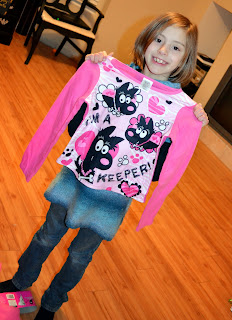 Nena was excited to get her animal themed pajamas.  She is an animal nut and loves everything to do with them.  She was a fan of her doggie P.J.’s. 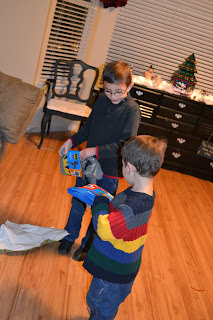 It doesn’t get any better than Batman for Bear and Mario Brothers for Toad.  Regardless of the looks on their faces, they were thrilled with them. 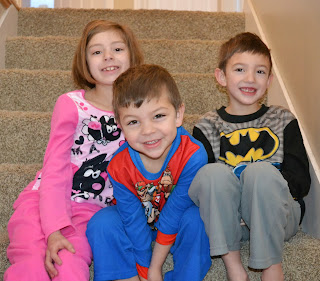 I am sure that one day they are going to hate posing for this particular picture as much as I did when I was younger.  However, being a parent has its perks.  You can get your kiddos to do almost anything around Christmas.  I did let one thing slide though.  They didn’t have to comb their hair.  That was a battle that I wasn’t about to enter into. 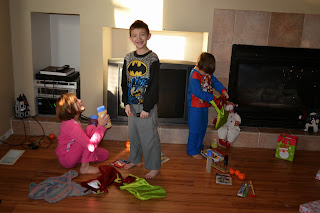 Stockings are a bit deal in our home.  They were a big deal in my home growing up.  My mother made all of our stockings and we had them all through growing up.  This year, my mom gave my siblings and I the stockings that we had growing up.  It was quite nostalgic and sweet.  Up until this year, the kiddos have used stockings that I made for them.  However, I swapped them out this year for some cute ones that I found at the store.  Next year, I plan to me stockings for the whole family and have a common theme somehow.  I figure that if I start now, I might have them done by the time that Toad is 18.  No, really it is something that I am going to do this year. 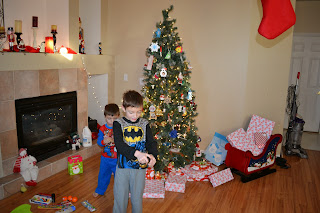 I obviously was so interested in cleaning up for the pictures.  Yes, the Dyson is becoming a permanent fixture in my pictures now days.  I love it, and it seems to follow me around the house.  The gallon of glue in the corner, well, do you ever have those items that you don’t realize aren’t put away until you see them in pictures.  No?  Just me?  Well, then… nevermind.  It was a Christmas present to me.  Um… yeah… that’s it.  Santa left me glue! 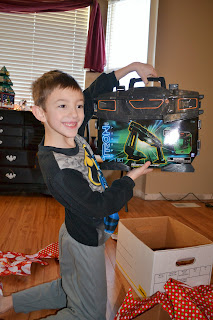 The kiddos each had a gift that made it to the top of the fav’s list.  Bear’s happened to be a Tron toy of sorts.  I am still not exactly sure what it does, but he loves it. 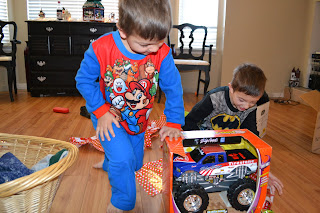 Toad got a monster truck that makes sounds and moves.  He was in love from moment one. 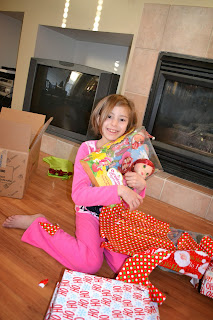 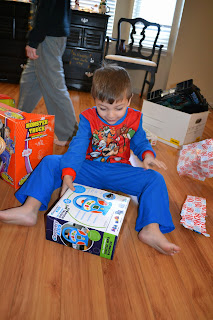 When you mix sale items, additional 30% off coupon and Kohl’s Cash, Santa can get one heck of a deal on some pretty cool gifts.  At that point, it is easier to nix the elves and put aside all of their work making the toys and just run to the mall. 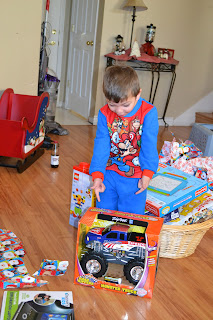 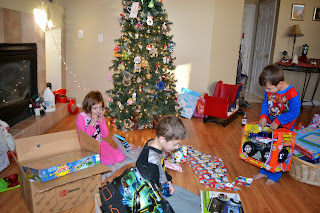 It was an early, busy morning.  We had to have Christmas up, running and over by 11:00 in order to make it over to my parents house.  My brother was calling from his Brazilian mission early in the afternoon and we had to make sure that we made it on time.  Luckily, with three kiddos all under the age of 9, Christmas morning goes by pretty quickly.