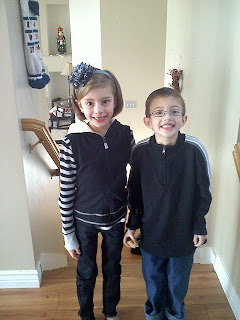 This year, we really did have a great Christmas. I will post about it when I have a moment! Anyway, I just had to post this pict of the kiddos. This year, I moved away from toys a bit. They each got one from Santa and I knew that their dad and their grandparents would go nuts in the toy department, so practicality went into play and the kiddos got a few clothes instead. To my great surprise, they were THRILLED!!!!!!!

My kiddos are on the skinny side. VERY much on the skinny side. That in short means that they can wear their clothes forever. That is really nice in the way that I don’t have to buy clothes every 3 months. However, they end up wearing the same thing all of the time and will often wear them out before they grow out of them. They never ever complain or even say anything at all.

I remember being their age and not being thrilled over clothes and was ready to have them think that it was kinda ho hum. However, their reaction was just the opposite. In fact, I will have to tell you, Bear is so excited that he is now being meticulous with his clothes. After Christmas morning, he went into his room and reorganized his drawers on his own. He neatly folded his clothes and placed them all perfectly in the drawer. He dedicated a special drawer to his new clothes. Those are his special ones. That is something that I thought would NEVER happen. Now, he needs to teach that trick to his sister.

Anyway, I give you one of the new outfits that the kiddos received. I couldn’t be happier and more grateful to have been able to give them something new to wear to school!

That is so cute about re-organizing. I can't picture any of mine doing that 🙂 They look adorable. Good job Mom 🙂