Just as a little prelude that has nothing to do with this post…. Are you all just SO DANG PROUD of me for posting for 12 straight days. Woo Hoo! I am following through. I am really liking this whole sticking to something once you’ve started it thing.

When I first found out that I was pregnant with Toad and before I knew his gender, I really really really wanted a girl. Now that I look back on it, I don’t really know exactly why except that pregnancy hormones do a DOOZEY on my body. Nothing against Bear, he was actually my snuggliest baby and to this day, I adore everything little quirky thing about him. I simply think that it was because I really wanted to have the chance to pretty up a little girl again.

I was convinced that he was going to be a girl and had already started buying clothes, accessories and thinking up names. It was a complete shock at my ultrasound and didn’t know quite how to react. Is that terrible to admit?

However, it only took me an hour or so to adjust and then all was right with the world and I knew that this was what was meant to be. I was told that more kiddos just weren’t in my future and I was honestly thrilled to get one last little one!

Now I look at life and see how much wisdom there is in the grand design. My boys are 3 1/2 years apart. They won’t ever go to junior high or high school together. They are complete opposites in almost every sense of the word. However, it just works.

Toad is verbose, opinionated, determined (headstrong and stubborn are the real words) and hilarious with his above the top vocabulary. He is short and stocky. He is NOT a snuggler, never has been. He is organized and cleans up better than any other young child that I have ever seen. He is 3 and STILL naps. In fact, he can barely function without an afternoon nap.

This picture was taken today after we came home from a window shopping trip at Roberts. He was terrible in the store and was on the floor kicking and throwing a fit. This sweet grandmaish employee came over and offered him a balloon which immediately calmed him down. However, I was not happy that we were indulging his naught side. Whatever gets you out of the store though. Right. Oh, and his favorite color is yellow. 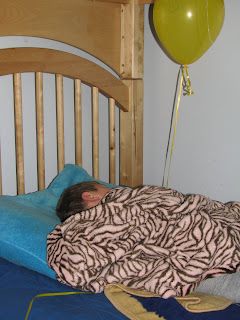 Bear is meek. He is soft spoken and easy going. He really likes his routine and his order, but is fine when things are calmly explained to him. He is tall and thin. He makes a mess like nobody’s business and can do it faster than you can blink. Seriously, if destroying a room was an olympic event, we would score the gold in 2020! He has an extremely hard time sleeping, but loves loves loves to snuggle.

This picture was taken this afternoon. He came home from school, immediately sat up at the counter, pulled out his homework and did it without asking. He asked if when he was done, he could play his DS. He raced through that homework like nothing that I have ever seen. This is how I found him rewarding himself for a job well done. Peaceful. Serene. Playing Pokeman like it was checkers, flawlessly. 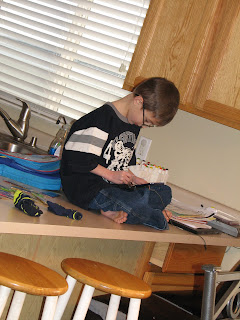 I see the great wisdom now in having been sent a Toad to compliment my bear. Bear needed a brother more than Nena needed a sister. Toad idolizes Bear and misses him tremendously when he is off to school. Tonight he cried for a minute until I understood that he wanted to kiss his brother goodnight. Bear, in turn, loves his little brother. He constantly includes him in everything that he does. He even requested that Toad come in and share his room with him. That turned out to be an amazing idea. 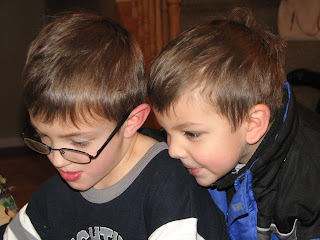 I love that they will always be close. They needed each other. 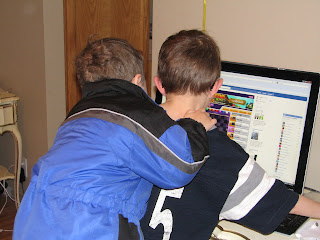 Even if it is only to beat mom’s score in Facebook Bejeweled. LOVE THOSE BOYS!