In continuation of the birthday celebration, we set up to have a small gathering at my parents house for Nena’s birthday.  I LOVE making their birthday cakes and I take a bit of pride that they turn out pretty cute.  So, this year for Nene’s cake, we decided on a butterfly theme.  After researching how to bake, cut and assemble a butterfly cake, I was ready to go.

I started off making the best buttercream frosting that you have ever tasted.  I know that that sounds boastful, but I am not joking.  The stuff is amazing, terrible for you, yet still amazing.  I ended up making a double batch.  After this step was over with, I started on the cake.

The first set of cake mixes went into my trusty side kick Kitchen Aid and the beater went flying…. until I read the box and realized that I had messed up the oil/ water combo beyond repair and had to scrap the entire thing.  I washed out the bowl and started over with another set of cake mixes.  At this point in time, something else happened. I blocked out how it happened don’t quite recall exactly what went wrong, but I had to scrap it once again.  Going back to my cupboard yet again, I realized that the only thing that I had left was a brownie mix.  It was 11:00 on Saturday night, I was home alone with the kiddos and had no desire to make up a cake from scratch so, I grabbed the brownie mix and decided that Nena’s birthday cake would be brownies with AMAZING buttercream icing.

The brownies went into the oven and came out without incident.  Proud of my meager accomplishment of not completely scorching brownies, I put them on the counter and left them for the next morning.  I slept a semi peaceful sleep thinking that my daughter would at least have something on her birthday.

At 6:00 a.m. I awoke to a rather strange sound.  I went and checked the kids rooms and they were all safe and sound.  I carefully went down the stairs to find no one.  However, there was something downstairs that made me scream!  The Brownies!  The center of the brownie pan had been eaten!  I was left with only a brownie doughnut! 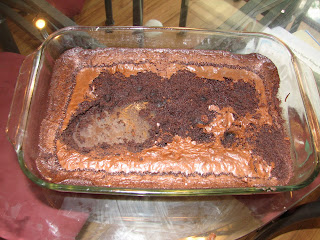 Apparently, the sound that I heard was my cute Bear.  He had woken up before I did and wandered downstairs.  He walked into the kitchen to see a perfectly wonderful sight.  Freshly baked brownies, laying on the counter top, with no one guarding them.  He couldn’t imagine that they weren’t meant just for him.  So, of course, he indulged himself just a tad.

I love comments too 🙂 Don't they make you feel loved?

My spirit cries out for brownies all the time — especially the edge pieces. And my buttercream frosting isn't the best ever. So share! I need this recipe for the best buttercream ever!